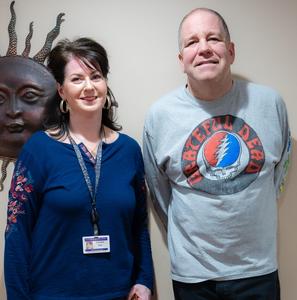 Reunited and It Feels So Good.

Selfless is defined as being more concerned with the needs and wishes of others than with one's own.  While this adjective can be applied to all of our dedicated Direct Support Professionals (DSPs), the term is especially fitting for staff member Elizabeth Ripp.

On October 19, 2021, Liz took the word selfless to an entirely new level as she put herself in harm’s way to protect a gentleman named Riko Raustiala, one of DDI’s first-ever residents. While in the middle of a parking lot crosswalk, Liz realized an oncoming car did not appear to be stopping. It was in that moment of imminent danger that Elizabeth reacted the only way she knew how – to protect Riko at all costs. In an attempt to shield Riko from harm, she took the brunt of the vehicle’s impact. Fortunately, Riko was evaluated at the hospital and was released quickly with a black eye and some relatively minor bumps and bruises. Liz, however, sustained a serious injury to her ankle, resulting in a surgery that left her unable to work for several months.

“Despite her injury and hardship, Elizabeth looked forward to the day that she could return to work and be reunited with Riko.  When I have thanked her, she says that she was ‘Just doing my job to keep Riko safe’,” said Riko’s mother, Margaret. We are in awe of Liz’s heroic actions that day and we could not be happier to see her back to work at DDI, reunited with Riko and his housemates, who have become like family to her.

Liz joined DDI in 2010. Over the past twelve years, she has worked as a DSP in our Adams Avenue Adult Day Habilitation Program, Adult Residential Services, and more recently in our Without Walls Program. While she has provided guidance and support for many people over the years, she has formed a very special bond with adult resident, Riko Raustiala. Liz describes Riko as “an all-around great guy, easy-going and eager to please.” Thank you, Elizabeth, for exemplifying DDI’s core values and for truly being a person inspired by purpose.

To learn more about Riko and the Raustiala family’s journey visit: https://www.ddiny.org/apps/news/article/1434803