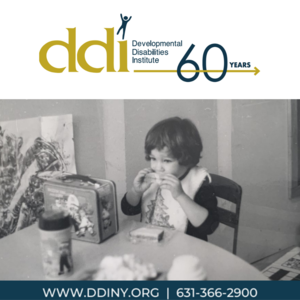 The Raustiala Family’s story is intertwined with the foundational history of DDI. Margaret and her husband, Kalervo, have two sons, and their youngest son, Riko, was one of the first-ever residents at DDI.

In 1970, when Riko was born, Margaret and Kalervo took him to many doctor’s appointments looking for answers about why their younger son was developing differently than their older son, Kal. After many professional opinions, at 18 months old, Riko was diagnosed with autism. At the time, this was a very rare diagnosis, especially for children so young.

When they learned this, they had no idea where they could go for more resources or to find similar families. After doing their research, they found there was only one place on Long Island where they could go, The Suffolk Center for the Emotionally Disturbed.

The Suffolk Center for the Emotionally Disturbed, now known as DDI, was founded in 1961 by a small group of parents, determined to find a better way to address the special education and therapeutic needs of their children. These families came together to create a school for their children with autism. This school began in a home on Long Island with teachers that the parents hired. At the time, Riko was too young to join them for school, so Margaret and Kalervo kept him home until he was three years old.

By the time Riko was old enough to attend, the state of New York had declared autism a developmental disability. This led the school to change its name to the Suffolk Child Development Center. The school moved from operating in a home to the Montefiore Seminary in Bayshore, NY. Riko now joined the school with six other children, having class in a seminarian bedroom. The students' parents were the foundation pieces of the school.

“We all pitched in to make the school run. The parents brought toys in for the children. The parents painted the walls!" Margaret shared.

As the program continued to grow, the school relocated to Smithtown, NY, where DDI currently resides. As years passed, the original group of children began to grow up, and the organization was met with the need for an Adult Day Program. As the organization expanded its services and enrollment, Margaret was invited to join the Board of Directors, where she served for many years until 2001. Margaret served on the board while they officially transitioned to the name Development Disabilities Institute.

Looking back on her journey, Margaret shared, “DDI’s priority was always keeping the needs of the children first. They were cutting edge and forward-thinking even back then. DDI was one of the only programs doing a full day instead of a half-day. This was crucial to the children’s development.”

Today, Riko resides at a DDI Group Home. Riko just turned 50 years old and is very loving and kind to his DDI family, friends, and roommates. The Raustiala Family is very grateful that everyone that comes into their lives accepts and loves Riko for who he is. He has a great relationship with his family, especially his nephews, 14-year-old Clark and 11-year-old Willem!