Tell Governor Cuomo - Our Kids are YOUR Kids! 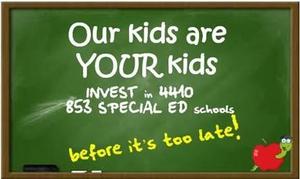 “…every child, rich and poor, black and white, urban and rural, deserves the same quality education.”
These words were taken directly from the Governor’s 2019 Justice Agenda presentation - but what about children with disabilities attending 4410 special education preschools and 853 special education schools?

There’s no mention of students with disabilities.

Don’t children with disabilities, who need more support than a school district can provide, and are referred to 4410 preschools and 853 schools by the Committees on Special Education because no other program can meet their needs, also deserve “the same quality education”?

The Governor proudly states that since 2011 education aid has increased by 42%.  During this same period, 853 special education schools have received 22% and 4410 preschools have received just 8%!  This lack of funding prevents our schools from paying teachers’ salaries anywhere near what school districts pay.  Teachers who work for school districts also work 10 months rather than 12 as our teachers do, and have far superior benefits.

Kids with disabilities ARE entitled to the same quality education that every kid in New York State is entitled to!

Call the Governor, your Senator, and your Assemblymember and say:

Find your Legislators’ and the Governor’s contact info here.