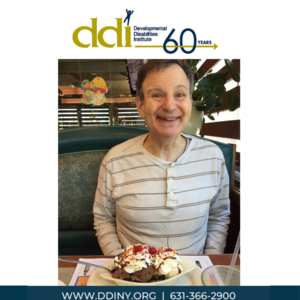 Paul, Ali, and Aimee are siblings that grew up on Long Island, NY, and Paul has been a long-time member of the DDI Family! Ali and Aimee shared with us, “DDI staff and residents have become Paul’s extended family.”

Paul was born in 1957 and just like any child, when he was old enough, his parents enrolled him in their local public school. Upon starting, the public school deemed Paul too disruptive for their classes and wouldn’t let him attend. They didn’t offer Paul’s family any alternative options. The school system simply said he cannot attend here. The only other school Paul’s family knew about was an elementary school that served those with cerebral palsy. Paul didn’t have a specific diagnosis, but his family felt that there wasn’t a good fit either.

Paul was constantly misdiagnosed while he was young, and at the same time, they couldn’t find any schools that offered proper services for Paul. That is, until they found DDI!

Paul joined DDI’s education program, and his parents found somewhere that would be a long-term fit for Paul. In school, he became friends with two young boys, Bruce and Jeffery.

“Thanks to DDI, Paul has done really well working on his socialization, communication, and education. DDI has made him really happy, too. He wasn’t happy like this before he went to DDI.”

As he grew up, Paul was eventually diagnosed with autism about the same time he finished school and transitioned to the DDI Adult Residential Program. Through the residential program, DDI teaches Paul how to do day-to-day activities by himself. DDI is focused on growing his independence. Every week, Paul and his housemates make up their shopping list at home and bring it to the grocery store. At the grocery store, Paul will go down the aisle and pick out the items all by himself. This gives him a sense of responsibility, while the DDI staff trail behind.

Creating a routine has helped Paul flourish in his life. It makes Paul feel comfortable knowing there are planned activities for the upcoming day, most of which include socializing with his two housemates - Bruce and Jeffery! The same friends he had in elementary school.

Ali and Aimee shared, “Before the COVID-19 pandemic, Paul was involved in a lot of sports, dance, and music lessons. He would go to church or the synagogue. He enjoys going to work. DDI always has something for him to do. He has found his home at DDI!”