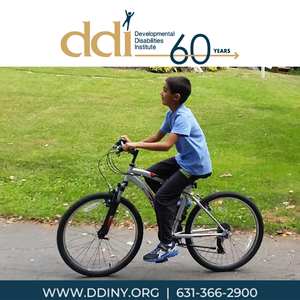 “We didn’t always know what to do with Kian, but we knew that we could trust DDI.”

The Shah Family story started at Penn State University when Raj and Niloufar met and became college sweethearts! Several years later, in December of 2004, they had their son Kian. As their first and only son, Kian became the center of their world. They were excited to welcome him into their lives and complete their family.

By the time Kian turned one, they thought there might be something different with him. They sought help diagnosing him and quickly found out he had autism. As parents, they were unsure what to do and where to go from here. Raj and Niloufar love to read, so they dug into some reading and found books that could educate them on autism. Through their extensive research process, they found DDI. They were excited about finding a place that could meet the needs of their son, and they joined the DDI family.

Kian was one of the youngest kids in DDI’s education program when he joined DDI at just 2 years old. As Kian started with DDI, his parents kept their eyes open to the possibility that DDI might not be the right fit for their son. With this in mind, Raj and Niloufar went on to extensively interview 20 different schools! Through this process, they found more and more reasons why DDI was indeed the right fit for Kian. Their biggest draw to DDI was the amazing staff. They saw DDI’s extremely dedicated and hardworking staff who are open and excited to collaborate with all of the parents.

Now, 17-year-old Kian has enjoyed being a part of the educational program at DDI, and his parents have been amazing advocates for Kian’s education

Raj shared, “Even though Kian is a nonverbal autistic child, he should have a curriculum just like anyone in school would have. Which includes math, science, history, social studies, geography, and all of the other subjects. We spoke to the DDI teachers and they incorporate all of these subjects into his curriculum, they have taken their own time and energy to make sure there are special programs to teach Kian how he learns best.” DDI teachers also work with Kian on his vocation skills and growing his independence, with skills such as dressing and taking care of himself. Raj and Niloufar know they can fully trust the teachers, and if a certain teaching style doesn’t work for Kian, they will adjust accordingly to find a method that works.

Raj and Niloufar are grateful that DDI is dedicated to working hand-in-hand with their family. Kian may learn differently than other children, but he has made progress, and Raj and Niloufar are so appreciative of the teachers and all of their hard work.

To show their appreciation, Raj served DDI on the Board of Directors from 2007-2008. DDI is grateful for the Shah family and the Shah’s are excited to wish DDI a wonderful 60th Anniversary!