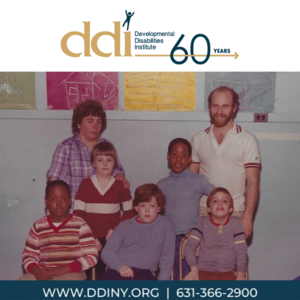 The Eschmann Family has a long and notable history with DDI! We are excited that John spent some time telling us the story about his family and specifically his brother Richie.

Richie was born in 1973 with autism. At this time, autism was very misunderstood, and there were not a lot of resources for families and children. Richie and John’s parents learned about DDI while it was previously called the Suffolk Center for Child Development. Their parents knew this would be a safe and welcoming place for Richie and enrolled him in the school at five years old. That is when their whole family realized what a special place DDI was, and they had to join forces to support the students and help it grow.

In 1979, their father, John Sr., joined the Board of Directors of DDI, where he served for the next 20 years. The early years were foundational for the organization and board meetings were often held in John’s family living room. John Sr. recruited many of his friends and professionals he knew to serve on the Board of Directors as well. John’s mom, Alice, was the president of the first Parents Association and she served as the librarian at DDI for over ten years! John Jr. served DDI as a custodian/groundskeeper at several locations as his summer job during his college years. It was truly a family effort to support DDI.

Richie connected with the DDI education program and even remembers some of his early teachers like Ethel Rapp and Shirley Burke. The president at the time, Mike Darcy, would make home visits to chat with the parents and give them instructions for the children outside of the classroom. At age 15, Richie became the very first student to join the Childhood Residential Program! Once they started the program, he was the first official resident, and then it filled up very quickly.

When Richie aged out of the Childhood Residential Program, he transitioned to the Adult Residential Program where he currently resides. Through the Adult Residential Program, Richie enjoys his life to the fullest potential. He has house managers that have become family. His house managers have taken Richie and other residents on out-of-state trips, often to the store, to fun activities, and to work! Richie loves to walk, and he previously had a job where he would walk door-to-door placing advertisements on people’s doorknobs. When John visits Richie, he takes him to Sunken Meadow for a long walk. They have even ventured there in the snow because Richie likes it so much!

John shared with us, “Obviously, our family has been a huge part of DDI the past 60 years. DDI has truly been a Godsend for us. It is a one-of-a-kind program, and it made a tremendous difference in our lives, and I know it’s still doing the same for other children and adults. There is nothing else like DDI, and we will never move Richie out.”