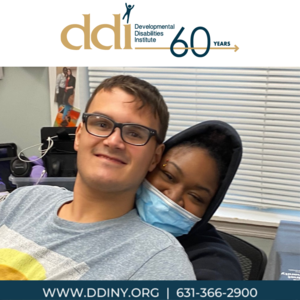 The Camaroto Family, consisting of Charles, Irene, Matthew, and Brian, reside in Long Island, NY. Charles and Irene are extremely proud parents of their two sons. Their oldest son Matthew is 22 years old and just graduated from Stony Brook University with a degree in political science. Their youngest son Brian moved into a DDI residency three years ago - and the Camaroto’s DDI story began!

When Brian was young, his parents struggled to find the right diagnosis for him. After many medical opinions, they thought that he may have hearing problems, but Brian was later diagnosed with autism at age two. With this in mind, Brian’s parents wanted to find a program that would educate their son and help him progress in all areas, including life skills. They had therapists and teachers come to the house, he attended public school, and the Camaroto’s thought they had exhausted all of their options. This is when they found DDI! For Charles and Irene, Brian moving out of their home into the DDI residential program was a decision they didn’t take lightly. Brian had lived with his parents all of his life, and Charles and Irene were hesitant and skeptical to trust anyone else with their son. Despite their initial hesitancy, they were comforted by how intimately DDI knows their son. They love that DDI knows every single child by name. DDI is focused on working with Brian however he operates best. Most importantly, Charles and Irene love DDI’s open-door policy. They need a safe place where they can always come and hug and kiss their son. Before the pandemic, they would visit Brian two or three times per week and bring him home on Fridays to have sleepovers. Charles shared, “It is hard with the restrictions of the pandemic, but DDI is so collaborative. I know we are working together with DDI to achieve whatever is best for Brian.”

DDI is so glad we have the Camaroto’s as a part of our family!