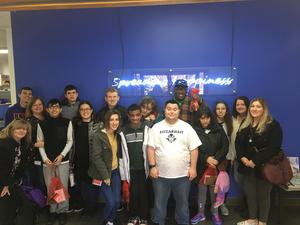 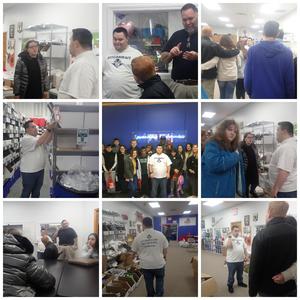 The students were greeted by John himself when they walked in the doors. Students were then taken to the conference room to watch a short video that reviewed how John started his business, as well as his mission statement of “spreading happiness.”

John and his father took some time to advise the students. John told them to “follow their hearts” and that they too could one day accomplish their dreams.  John refers to himself, and others like him, as having “differing abilities” not disabilities. He told the students that this has never stopped him from reaching his goal of “spreading happiness.”

After the talk, John took the students on a tour of the facility, explaining the various job responsibilities and the process that occurs after a customer orders a sock until it is delivered. At the end of the tour, students were able to take a photograph with John. He gave each of them a gift, which included a pair of socks, a handwritten note, and candy (these items are included in all of John’s socks orders).

The Art Club attended this trip to learn about different opportunities in the work field. John has designed a few socks himself, as well as greeting cards. "The students in the Art Club are creative and, therefore, could benefit from learning about different ways in which they can utilize their creative abilities," commented Michelle D'Errico, the art teacher at the Children's Day Program.

In the art club, students have the opportunity to improve upon already existing skills and are introduced to more advanced art methods. These skills that are developed in Art Club can be used in jobs, such as working as a sock or greeting card designer in John’s Crazy Socks.

Special thanks to John and the team at John’s Crazy Socks for an educational and inspirational backlot tour of what makes their company so successful.