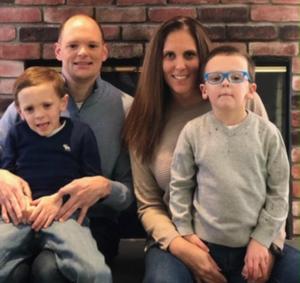 In May of 2015, Erika Nordin knew she needed to make that call. The call to the Suffolk County Department of Early Intervention to evaluate her baby, Jack, who just celebrated his first birthday.

Erika’s concerns were real and urgent.  Her son Chase, just 16 months older than Jack, was diagnosed with an Autism Spectrum Disorder and she knew early intervention was critical.

“Jack was evaluated just after he turned a year old.  He qualified for physical therapy services at home," commented, Ms. Nordin. “Although we saw some progress, he was evaluated again at 18 months and began receiving speech therapy, occupational therapy, and special education services also.”

Jack continued to receive home services and was progressing but struggling to produce sounds.  As the family and the team began discussing preschool services, his teachers suggested Mr. and Mrs. Nordin visit Developmental Disabilities Institute (DDI) and offered to accompany them on the tour.  Mrs. Nordin recalls the tour vividly, “I loved it - there were small classes, distraction-free areas within the classroom, parent training and team meetings, which was exactly what I was looking for.”

Jack began attending DDI’s Early Childhood Learning Center in Ronkonkoma in September 2016 in a small class specializing in services for children with autism spectrum disorders.  Kristina Ikonnikow, Jack’s teacher, commented, “When Jack began he had two verbal approximations, one for “yes” and one for “no” and a few American Sign Language approximations for basic requests. We introduced Jack to the Picture Exchange Communication System (PECS), and he flourished.”

After careful assessment, the educational team and the family agreed to assess Jack’s ability to use an augmentative communication device, and the iPad was introduced with the Proloquo2go app. “Jack’s language and participation exploded with the iPad.  He was able to string together sentences and respond in morning circle with ease,” stated Ms. Ikonnikow.

At school and home, the team described some additional benefits that came about as a result of the iPad.  Jack can indicate when he needs his noise-canceling headphones when it becomes too noisy, he also asks for some extra time before a transition and the most notable is being able to ask to visit other friends or teachers from different classes.

In reflecting on this past year, which is also Jack’s last year before kindergarten, Lisa Lee, education behavior specialist who has been part of Jack’s team since he began at DDI shared, “Jack now speaks in sentences, is intelligible to those familiar with him.  He greets people, comments, and asks about his friends.  He now spends part of his time in a larger class size and is flourishing.”  Ms. Lee added, “The dedication of Mr. and Mrs. Nordin, including their participation in parent training and carry over at home has been a critical component to Jack’s success.”

Just one day after Jack celebrated his fifth birthday, Mrs. Nordin wrote in the communication notebook to the team, “Jack has come such a long way.  He is talking in sentences, and I can now say that Jack is verbal.  It is the best feeling in the world to hear his voice.”